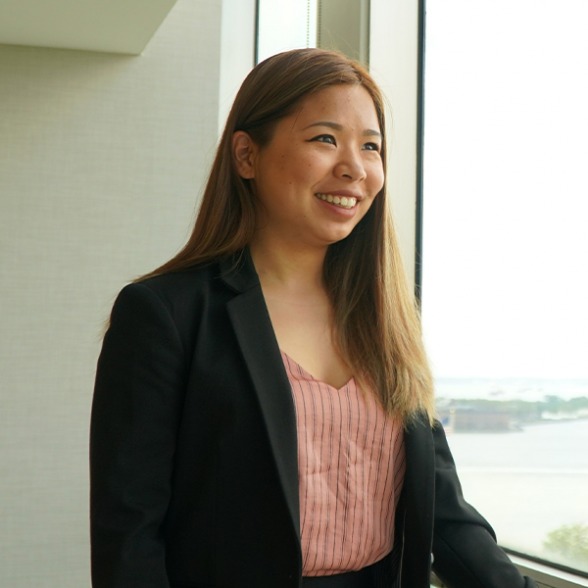 A Chinese immigrant who came to America at the age of 15 without knowing a single soul or more than a few words of English, Han joined the Army four years later and deployed to a combat zone in Iraq for a year.

Now a 25-year-old college student with a nearly perfect GPA, Han is spending her summer in Hughes Hubbard's Veteran Internship Program, an educational initiative that helps veterans transition from military service to the civilian workforce.

"I'm really excited about the opportunity here," she said. "I want to learn as much as I can."

Han is working in HHR's finance department as the sole intern in the firm's fourth iteration of the program, which is running for 10 weeks this summer until the first week of August. Since 2015, the program has offered qualifying veterans competitive pay, invaluable work experience and various networking opportunities.

Han is the first female veteran to participate in the program. "She is particularly impressive," said retired Army officer Bob McGowan, the firm's chief financial officer, who has overseen the program since he launched it at HHR four years ago. "She's done more than many of us at her age. She'll be a wonderful ambassador for the program and the firm, and this experience will help her on her way to wherever she's going."

Born and raised by her aunt and uncle in Fuzhou, China, Han immigrated to America in 2009 to reunite with her mom, whom she hadn't seen since she was 2. Reluctant to part ways with the only life and family she knew, Han steeled herself for the biggest change of her young life. She met and joined her two half-sisters, who all emigrated from China at the same time, and moved to Chinatown in lower Manhattan to begin a new life. Han eventually learned to speak English fluently and attended York College in Queens, New York for a year.

In the summer of 2013, Han decided to join the military after reconnecting with one of her high school friends who had recently enlisted in the Army and told her about his experience. For a year and a half, Han worked with the New York National Guard's Joint Task Force Empire Shield, providing security at New York City transit centers such as the World Trade Center hub, Grand Central Station and the Port Authority bus terminal.

In April 2016, Han participated in the New York Army National Guard Best Warrior Competition, a grueling four-day contest that tests soldiers' military knowledge, physical fitness, and land navigation skills in a variety of situations. The challenges included a 12-kilometer road march with a 35-pound pack, a three-gun stress shoot, a series of military drills and written knowledge tests. Han won the junior enlisted category for soldiers in the rank of private to specialist.

Then Han deployed to Iraq as an interior engineer for a year starting in October 2016. Han was responsible for reviewing building blueprints and strategically implementing a power supply network. She rotated to different places, including bases destroyed by ISIS, and slept in underground bunkers. Han described her tour of duty there as "rough," enduring intense pressure around the clock.

"If you have job-related stress here, you can escape it after you leave work," she said. "But over there, it doesn't go away. Sometimes, it was really hard."

When Han returned home, she continued studying at Baruch College full-time, where she has a 3.89 GPA. She also joined Baruch College's Student Veterans Association, a campus chapter of Student Veterans of America, a national nonprofit devoted to addressing the needs and concerns of student veterans. In April, she was elected president of the chapter.

Han will graduate either next year or in 2021 with a bachelor's degree in actuarial science. Han wants to work as a casualty and property actuary at Liberty Mutual, and become an associate in the Casualty Actuarial Society. To gain experience in finance, Han applied for HHR's internship after learning about it from John Ly, a Marine veteran who participated in the program in 2017.

So far, Han is enjoying her first experience in a corporate environment. "It's really exciting," she said, noting that the work is less stressful and physically demanding than her military duties. "Everyone here is really nice. They always answer my questions. And I have a lot of questions."