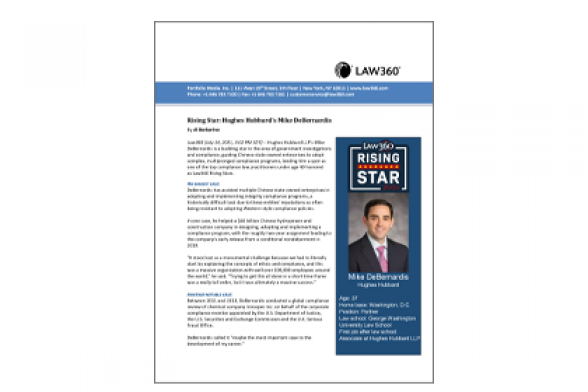 July 20, 2021 – Michael DeBernardis, a recently named Law360 2021 “Rising Star,” was featured in a profile on his recognition that described him as a “budding star in the area of government investigations and compliance.”

DeBernardis was one of five attorneys selected for the ‘Compliance’ category of the annual list, which recognizes lawyers under 40 whose legal accomplishments transcend their age.

The July 14 profile noted that DeBernardis’ efforts to assist multiple Chinese state-owned enterprises in adopting and implementing complex compliance programs was a key factor behind Law360’s decision to honor him. In one particular case that spanned two years, he helped a $60 billion Chinese hydropower and construction company build a compliance program that led to the company’s early release from a conditional nondebarment in 2019.

“It stood out as a monumental challenge because we had to literally start by explaining the concepts of ethics and compliance, and this was a massive organization with well over 100,000 employees around the world,” DeBernardis said of his biggest case to date. “Trying to get this all done in a short time frame was a really tall order, but it was ultimately a massive success.”

The profile also cited his accomplishments from earlier in his career. Between 2011 and 2013, DeBernardis conducted a global compliance review of chemical manufacturer Innospec, which he called “maybe the most important case to the development of my career.” DeBernardis traveled to Innospec’s offices around the world to interview employees and assess the effectiveness of the company’s compliance program, including the anti-corruption due diligence processes that the company used to screen its global network of sales agents and distributors.

“It happened at a perfect time of my career, as a mid-level associate, so I was able to really jump in for a period of three years, really get my hands dirty and be on the ground,” he said. “It was really unique and important work. The skills and lessons I learned in that matter stick with me today as I’m counseling clients.”