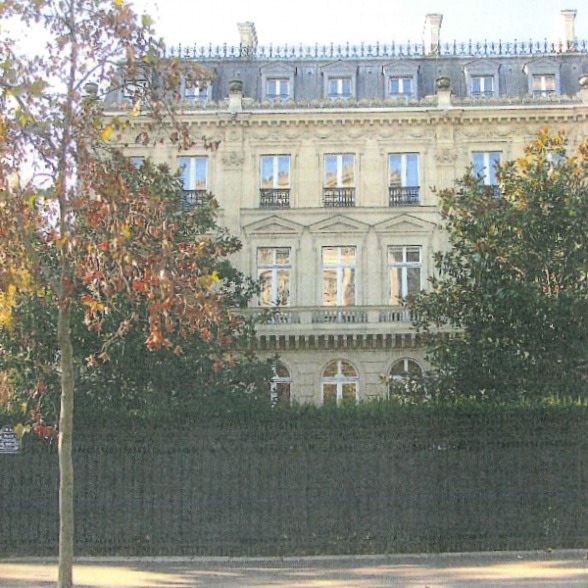 It was a beautiful summer evening in New York in June 1966. A small group of Hughes Hubbard partners had gathered on board the liner SS France at her pier to see off one of their youngest partners on his way to open the firm’s new office in Paris.

I was that partner.

This was a bold move for the firm, opening its first-ever branch office. We would be starting where only a handful of our bigger New York rivals had ventured, some of them years before. But the European Common Market was just beginning and we had an impressive roster of large corporate clients, some large cross-border litigation and ambition. Orville Schell and Robert Sisk, both future firm leaders, conceived the project with the enthusiastic support of then- senior partner Francis Reed.

Although the actual opening of the office was barely noticeable, we did two things right: we hired George Balkind, an American lawyer living in Paris, who was a trove of local knowledge and new business contacts; and Claude Suleyman, a superb French corporate lawyer, who earned the trust of all our lawyers and clients. Both of them became pillars  of the Paris office, as well as close friends, and remained with the firm for the rest of their careers.

We also started a program to bring over young associates from New York for yearly stints. The first such visitor was Tim Zagat. Tim and his wife Nina, determined gourmets, started a handwritten list of restaurant recommendations for our clients, which eventually led to the now-famous Zagat Guide. Other visiting associates included Candace Beinecke, Ted Mayer, John Townsend and Chuck Scherer.

Our office soon became a founding member of a “Club” of leading European law firms that extended our reach across the continent and gave us a valuable source of new business, as well as lasting friendships.

We didn’t have built-in clients, so we had to scramble. We began by doing motion picture work for Allied Artists and high- profile work with leading sports agency IMG, representing top athletes including tennis star Bjorn Borg, French skiing champion Jean-Claude Killy, Formula One driver Jackie Stewart and golfer Gary Player. We also attracted some larger new clients (music group EMI, British chemical maker LaPorte and U.S. oil company Charter Oil), as well as some mid-sized U.S. clients. Among the latter was Mary Wells, the advertising star of Madison Avenue. We acquired agencies across Europe for her, as well as a palacio on the Cote d’Azur, and organized her spectacular wedding  in Paris — not the normal Wall Street fare, but we  were also advising several leading fashion designers (including Kenzo and Karl Lagerfeld), the famed Tour d’Argent restaurant and the Cordon Bleu cooking school.

It was during this period that the 1968 student revolution intervened; Paris was paralyzed for weeks, a veritable battleground with riots every day — all public services, transport and communications stopped and business life came to a halt. Not ideal for a start-up venture, but we survived. 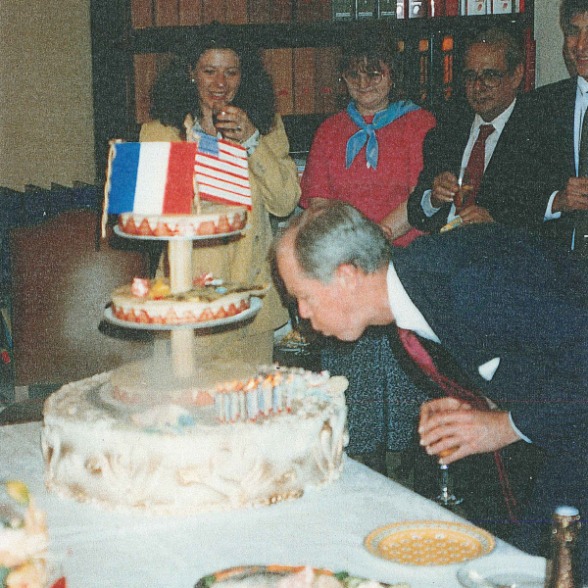 Axel Baum blowing out candles at the Paris office’s 25th anniversary celebration in 1991.

Then our first big break came when we advised the U.S. construction group Blount on the French financing aspects of its multibillion-dollar deal to build the University of Riyadh. We also landed substantial new European clients, including Dutch publisher VNU, EuroDisney, France Cable & Radio and — importantly — France Telecom. As the office grew, we moved to bigger and more attractive locations until we settled in a gracious building on Avenue Georges Mandel, where we added space, floor by floor, and remained for many years.

In the early 1970s, we started to get involved in arbitration. John Townsend (then in Paris) and I worked together on our first role as counsel for a New York client while the office became increasingly active in matters for  the International Chamber of Commerce. We advised German engineering giant Siemens in the landmark Siemens-Dutco case, and obtained the first contested award won by an American party in the U.S. Iran Claims Tribunal. Our arbitration work, as counsel and arbitrator, burgeoned and the firm became a leader in the field.

Our biggest breakthrough came, however, in the early 1980s, when McDonald’s became a client, due primarily to one of Ted Mayer’s Paris neighbors, and which led to the development of a thriving real estate and franchising practice. Other major clients arrived with substantial commercial and M&A work, including Rockwell Int’l, U.S. Surgical, Arco Chemical, Alstom S.A. and Carnaud Metal Box, along with longtime firm clients Merck and Bendix/Allied Signal. We represented U.S. clients in a billion-dollar restitution claim in Berlin and Koch Industries in the construction of a supertanker. In the late 1980s, with the help of Hogan Lovells, we also won two massive litigations in London in favor of the Libyan Foreign Bank, making national headlines. And even then we participated in several substantial FCPA internal investigations.

In the early 2000’s, the European market began to change dramatically with the invasion by other American law firms and the advent of globalization; new firms arrived, old firms left, various firms merged, with lawyers and clients moving with them. Hughes Hubbard was no exception. Some lawyers and clients left. Some new ones arrived, including Starbucks for real estate and franchising work, and Chrysler for a series of European acquisitions. In 2002, I stepped down as managing partner, but remained on the arbitration team.

In recent years, another metamorphosis has taken place. An increasing number of the firm’s American lawyers has been seconded to the Paris office, some permanently, others temporarily, to work on internal investigations for blue-chip French companies. The number of lawyers and legal assistants in the office has soared, including several new French partners, and English threatens to become the prevalent language once again. To accommodate this expansion, our office moved to new premises — an elegant building on the Rue de Presbourg, beside the Arc de Triomphe — and added an annex a few doors away on Avenue Kleber.

Fifty years after the SS France left New York, this is where we are. I’m proud to have been part of this adventure and grateful to all our colleagues and friends who contributed so much to its success.