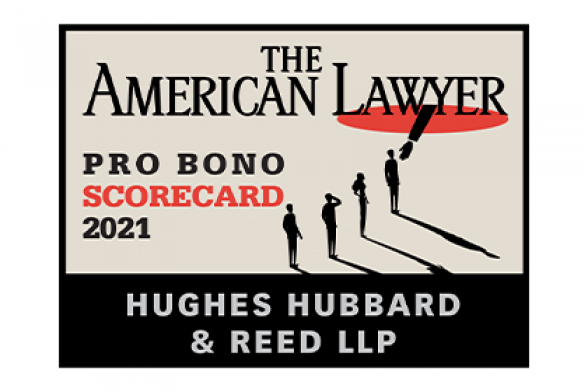 The ranking marked the fifth time in six years that HHR was ranked as a top five firm.

In the special report, published in the magazine’s July edition, HHR came in second place nationally with a 131.1 pro bono score, surpassing its previous best score of 115.7 in the 2016 survey. The rankings are based on a score that combines the percentage of lawyers who performed 20 or more hours of pro bono work with the average number of hours contributed in 2020.

The American Lawyer ranked those components independently, placing HHR second in average hours with 168.4 hours per U.S. lawyer and seventh in breadth of commitment (percentage of lawyers who performed 20 or more pro bono hours). The report showed that 93.8 percent of HHR’s lawyers performed at least 20 hours of pro bono work.

With ‘Pro Bono on Steroids,’ Law Firms Met Immense Need by Rising to the Occasion,” noted that with many people experiencing so much pandemic-induced pain over the past year, lawyers saw endless opportunities to put their skills to use.

Dustin Smith, co-chair of HHR’s pro bono committee, told The American Lawyer that the commitment to pro bono during 2020 reflected an effort to find a sense of community in a “very trying year.”

Last year, HHR devoted substantial time to immigration cases that achieved life-changing results for clients. These included securing the release of a Jamaican man – who pleaded guilty to criminal possession of a controlled substance and two weapon possession charges – from federal immigration detention after two years of appeals; and obtaining immigration clearance for an Afghan interpreter who spent several years working for the U.S. military in Afghanistan.

In other pro bono wins, the firm secured early releases for multiple inmates. In December 2020, a drug offender serving life since 1992 was released after a Virginia federal judge granted his request for a reduced sentence under the First Step Act. HHR also worked with the Legal Aid Society to win parole in July 2020 for a woman serving a potential life sentence since 1996 for murder in a spousal abuse situation.