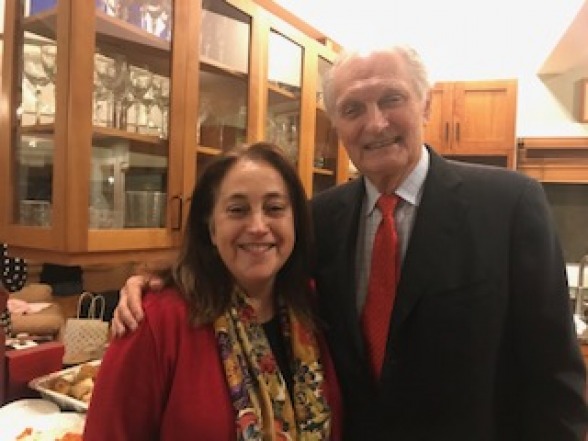 Alexandra Poe and Alan Alda at a holiday party for the Alan Alda Center for Communicating Science at Stony Brook University.

Alda launched ACT in 2016 to expand the work of the Alan Alda Center for Communicating Science at Stony Brook University, the first public-private partnership with the State University of New York System (SUNY).

Co-founded by Alda in 2009, the Alda Center teaches the Alda Method of communication, using improvisational theater games to help STEM and medical professionals communicate more effectively and to function better as teams. The Center's mission is to develop the qualities of authenticity, clarity and empathy as the foundation of powerful communication.

Since the Center's launch, 10,000 scientists and physicians across the country and overseas have been trained, and more than 30,000 people have been introduced to the Center's approach through plenaries and lectures, including more than 600 graduate students at Stony Brook University.

Alexandra Poe, who joined HHR in June 2017, began representing ACT at her previous firm in 2016. ACT promotes, books and manages the Alda Center's training for STEM and medical professionals and offers gender-focused leadership training for executives in other lines of work. In the style of Newman's Own, a food company founded by legendary actor Paul Newman, ACT contributes its net profits to the university to support the Center.

In less than a full first year of operations, ACT has been a big success and Alda was delighted to present a check for $100,000 to the Center's executive director at the Center's holiday party.

Alda, best known for his role as Hawkeye Pierce in the TV series M*A*S*H, has won seven Emmy awards, and received three Tony nominations and an Academy Award nomination.