We have handled many of the major financial cases of the last decade and have also represented firms and their individual partners and employees in investigations by the Department of Justice, the Securities and Exchange Commission, the Public Company Accounting Oversight Board and other federal and state law enforcement and regulatory agencies.

Our litigators are known for their defense of accounting firms, including U.S. and other members of the “Big Four” international networks of professional services firms. In addition, our Insurance Litigation group has extensive experience litigating issues under Errors & Omissions policies.

Representations of U.S. and foreign member firms in civil litigations and arbitrations include:

We have advised firms and individuals in grand jury proceedings and investigations by the Department of Justice, and in investigations and enforcement and disciplinary proceedings by the SEC, the PCAOB, the AICPA, and state accountancy boards and CPA societies.  Our representations include SEC and PCAOB investigations involving issuers in many industries, including banking, investment and financial services, communications, computers and software, education, energy and energy services, healthcare, leasing, transportation, utilities, real estate and REITs, and involving a broad range of accounting, auditing, and independence issues.  We tried the first case before the PCAOB’s Administrative Law Judge that resulted in the dismissal of all charges against the respondent accountant and that was affirmed on appeal to the PCAOB.

We also advise on regulatory and risk management aspects of --

We advise on Big Four firm transactions, including mergers and acquisitions, asset sales, and financing and partner investment and loan programs.  Our experience includes:

We also advise on -- 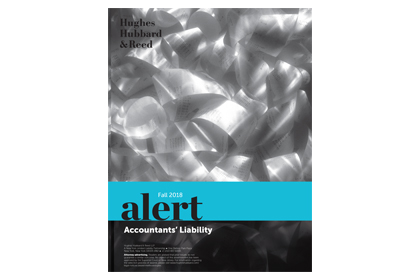